Millie is so excited to touch snow and ski on her wish trip. She also wants to sip hot chocolate and eat marshmallows in the snow.

Wish parents Erica and Kevin’s 2018 didn’t finish the way they had imagined.

Leading up to Christmas, their daughter Emilia – known as Millie – complained of a sore shoulder. Then came flu symptoms. But on December 29, the shocking news was delivered that would turn their lives upside down: Millie was diagnosed with lymphoblastic leukaemia. 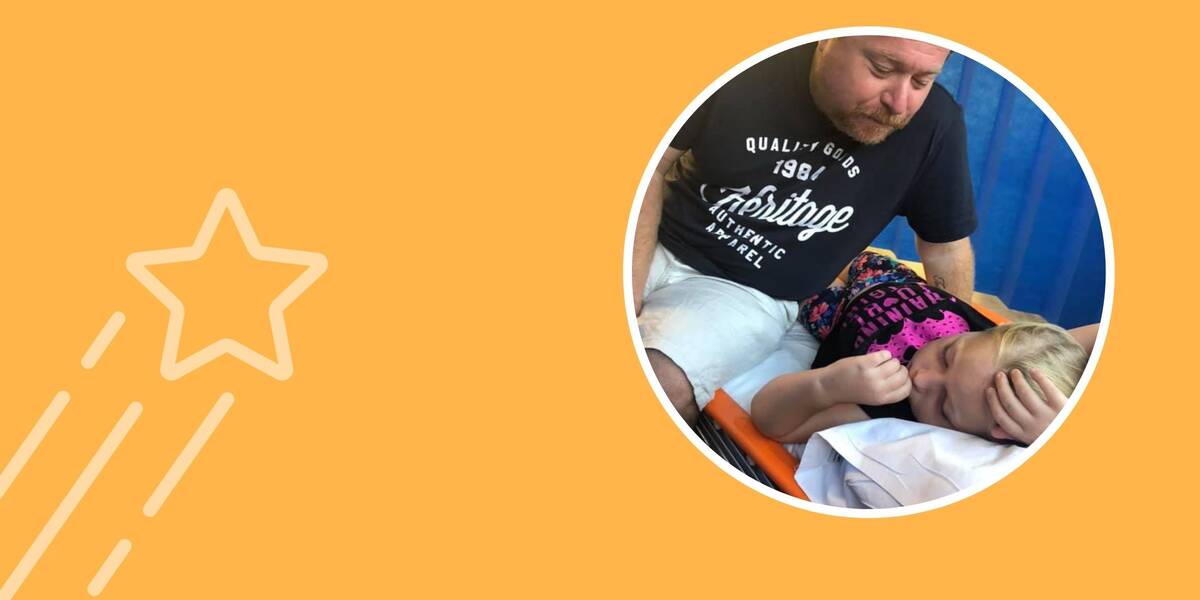 “You could see her heart beating out of her chest, and she was just in agony,” Kevin said. “They found a tumour around Millie’s heart, and that’s why she was in so much pain.

“The tumour was putting pressure on her heart; her main arteries and her whole left lung had collapsed.”

Kevin and Erica then had to compose themselves to tell those who needed to know what was going on with Millie.

“It was just mind blowing,” Kevin said. “You have to process it yourself but communicate it to everyone else at the same time. No parent thinks their kid is going to get cancer.”

Ups and downs for Millie

As doctors pumped chemo and steroids into Millie, the results were initially positive. The tumour had shrunk a little.

But a scan two months later found a nodule on Millie’s lung, and soon after, another scan confirmed the cancer was back. “So we tried a new drug and three weeks later, it had actually worked and cleared it up really well," Kevin said.

Olivia helps out her younger sister

The next step in Millie’s medical journey was to receive a bone marrow transplant. Her sister Olivia, almost four years older than Millie, put her hand up to help.

Both girls have matching necklaces to remember the occasion. The necklaces are inscribed with the words ‘Bone Marrow Donor Olivia – Emilia – 26/6/2019’. Two interlocking rings on the necklace symbolise their now forever bond.

“It’s a special link they now have,” Kevin said. “And we do celebrate that every bone marrow transplant anniversary when they have a little party.”

Millie can't wait to get to see snow

Millie’s strength in getting through her medical journey has inspired others. Throughout her months of treatment, Millie endured lots of pain and infections.

“As an adult, I think if that happened to me, I would have fallen in a heap,” Kevin said. “But there’s been no complaints from Millie. No crying. She took it all in her stride.” During her many days in the hospital, Millie watched documentaries, including some of people going to the snow.

Millie soon had an idea for her wish.

“She said, ‘Dad, I would really like to go to the snow one day',” Kevin said.

“The big one (on the trip) is skiing, but hot chocolate and marshmallows in the snow is also a big thing.

“She’s always talking about it. The other week she asked if people at the snow live in igloos.”

Kevin said the wish trip, which is on hold until COVID-19 is under control in Australia, would be a nice reward not only for Millie but her two sisters.

“A couple of years of Millie’s childhood was taken away, but it was also taken away from our other girls as their lives weren’t the same anymore,” he said.

Millie, who is now 10, said she had never been to the snow before. She said the thing she was looking forward to most involved her sisters.

“Yep my number one thing is to throw snowballs at my sisters!”

The wish is a special thing for Millie. It’s all about the recognition of what she’s been through.