Carmelo all smiles after puppy wish

While he was being treated for a brain tumour, Carmelo couldn't stop thinking about having his own cavoodle puppy. Thanks to our supporters like you, Carmelo's wish came true.

It was a smile seven years in the making.

Carmelo’s father Nat slowly ushered his 7-year-old son into the kitchen. His wish for a cavoodle puppy was about to come true.

“We wanted it to be a surprise so we kept it a secret,” Carmelo’s mum Daniela said. “We brought the puppy inside while Carmelo was in his bedroom.

“Then Nat called out to him, ‘Come into the kitchen; there’s something here for you!’ Carmelo immediately jumped up and asked, ‘Is it a dog?’ He was just so excited when he saw the puppy. He said it was the best thing that’s ever happened to him.”

Carmelo’s medical journey started late in 2020 when he began feeling unwell over a few weeks. He had blurred vision and kept losing his balance.

After a few trips to the local children’s hospital, Daniela felt something serious was wrong and asked the doctors to scan Carmelo’s brain. 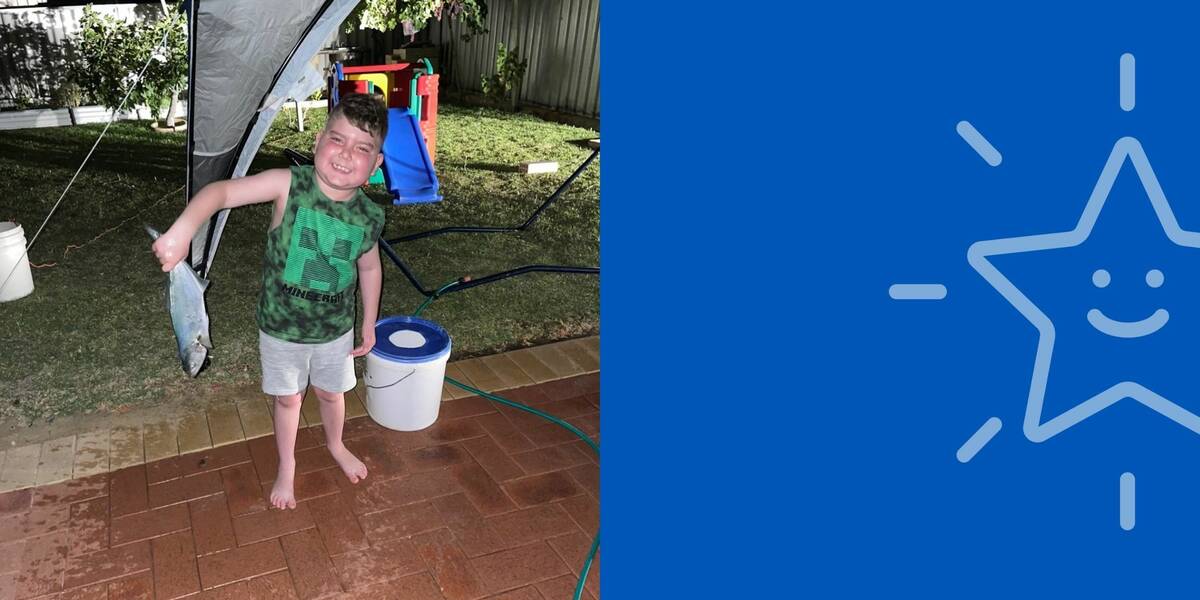 “They agreed, and did an MRI scan in the morning. That evening, we got the bad news,” Daniela recalled.

Carmelo was diagnosed with an inoperable brain tumour.

“I had a feeling because they took a really long time to do the scan and when they pull you aside and take you into another room … you know there’s something wrong,” a tearful Daniela remembered.

He had to miss the last term of school and forget about seeing friends, playing soccer, and fishing with his dad; all the things he loved.

Within weeks the radiation started to work, but the side effects took a toll on Carmelo. He left the hospital in a wheelchair, unable to walk. But, slowly, improvement came.

While Carmelo will require ongoing medical treatment, he is starting to return to his usual happy self.

“At first, you could tell he was feeling depressed, but now he’s getting back to being the Carmelo we know,” Daniela said.

“He has always been a happy boy. Always mucking around, telling jokes.”

Cavoodle on his mind

Helping Carmelo through the dark times was Make-A-Wish.

Make-A-Wish volunteer and WishForce champion Monique couldn’t meet Carmelo face-to-face because of COVID-19, so she arranged a Zoom meeting.

“I remember a beautiful boy sitting on his mum’s lap and he was very, very animated,” Monique said. Carmelo’s wish was classified as urgent because of his medical condition. So the WishForce moved quickly.

“He knew exactly what he wanted. A little toy cavoodle,” Monique said.

“Carmelo had played with his cousin’s cavoodle puppy named Bella, and she loved him.

“And even though Carmelo’s family had never really wanted a puppy before then, when they saw how much Bella lifted him, it was the turning point for them.”

Monique remembers Carmelo had something he wanted to say before the Zoom meeting ended.

“It was a question. He asked , ‘When would I get the puppy?’ and I explained about breeders and the waiting time to find the puppy he wanted, which was male and a certain colour,” Monique said.

“He thought about this and then he said, ‘I don’t mind if it’s a girl and a different colour'.”

Carmelo loves Milo in the morning

Daniela said Carmelo told her that he loves his puppy, which he named Milo.

Carmelo rises early each day to take care of his new buddy.

“He gets up early now, about 6am, to take Milo outside and feed him,” Daniela said.

“When he gets up in the morning, he always has a smile on his face. “And at night time, Carmelo will lay on the floor with his head on the couch and Milo will sleep next to him.”

“When he’s not feeling so good, they sit on the floor together and watch TV,” Daniela said.

“It’s just a beautiful and amazing thing that Make-A-Wish has done for my son. Because there’s no way we would’ve been able to get this puppy on our own.

“You can see he’s a lot happier now.

“I just want to thank Make-A-Wish and the breeder for making Carmelo a priority and all the people who donate and make it possible for wishes to happen.”

At night time, Carmelo will lay on the floor with his head on the couch and Milo will sleep next to him

You can make wishes come true